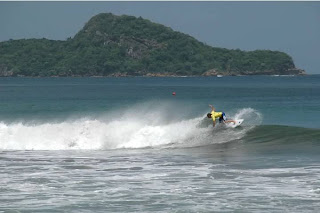 In 2002, a surfer named Chad Nelsen enlisted an economist at Duke University to help put a price tag on a popular surfing spot on Puerto Rico’s northwest coast. Nelsen’s idea was novel: to prove that the waves breaking on the beach constituted a multimillion-dollar asset and persuade the local town to take pains to preserve it.

Building on advances in natural resource economics, the new field of surfonomics seeks to better understand how waves and the surfers who ride them are driving economic development in coastal communities.

From this this month’s issue of Surfrider’s Making Waves:  “When the value of a natural resource is unknown, it is often assigned a value of zero.”

We may be loathe to quantify the value of nature, but would quantifying nature help us protect it? Our neighbors in Costa Rica are known for ecotourism’s contributions to their flourishing economy. Have you ever stopped to consider how much of that can be attributed to surfing?

Perhaps nowhere in the world has benefitted from surfing as much as the country of Costa Rica. Located in Central America, the county was once as impoverished as its neighbors. In the 1980 ’s and 1990 ’s, encouraged by governmental reforms that provided increased safety and improved infrastructure for travelers, surfers began to travel to Costa Rica in droves, due to its multitude of high quality waves, warm water, and proximity to what was then the world ’s biggest surf market – the United States. Costa Rica often used the image of surfing to promote itself to the world, and now boasts the healthiest economy and highest standard of living in the entire region. This is not to say surfing has been the only driving force in Costa Rica ’s success as a tourism economy, but the sport has inarguably had a positive influence. Here are some statistics from Costa Rica ’s Government Tourism Board:

Much like many of our enterprising Costa Rican neighbors, Paso Pacífico’s geotourism efforts are aimed at helping international visitors understand the ecological significance of the region where we work and helping local community members maintain traditional livelihoods in the face of rapid development. We are grateful to the support of the surfing community (Nicaraguan and international) in our efforts.

Partner with us! If you’re a surfer, join our Surf Ambassadors program. If you’re an economist, help us with a surfonomic analysis of eco-tourism development along Nicaragua’s Pacific coast. If you can’t join us on the ground, join us in spirit: donate to our ocean conservation efforts.