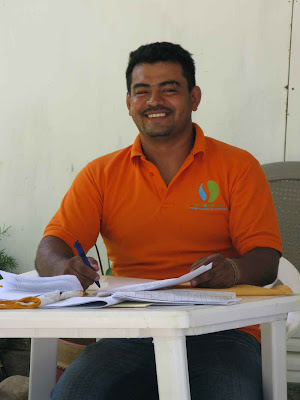 From humble origins, Salvador Sánchez, was elected as a community leader in the small fishing village of Ostional, near San Juan del Sur, became a conservationist, and is now a respected leader and successful entrepreneur. This is his story.(Adapted from the Spanish piece written by Adelayde Rivas Sotelo)

Natural Leader
Ostional is a small fishing community 24 kilometers south of the San Juan del Sur Harbor, in Rivas, Nicaragua’s southwestern-most province. Ostional is nestled at the edge of the tropical dry forest where it meets the rocky Pacific coastline.
In recent years, the 300 families of Ostional have watched as the wildlife and landscape have been threatened and degraded by deforestation, fires, and pollution.

Ostional also counts among its inhabitants an entrepreneur and popular community leader by the name of Salvador Sánchez. At 32, Salvador has earned the confidence of everyone in Ostional, young and old. They all respect and admire his efforts to improve their community. 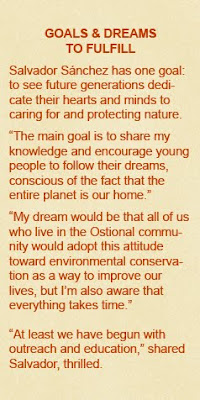 The youngest of ten children, Salvador is passionate about the pursuit of knowledge. He studied mechanical engineering, but dropped out for various reasons.

“Thanks to my brother, Jose Maria Sanchez,” Salvador shares. “I was motivated to organize people. He became a deputy. I wanted to understand policy procedures and work for the people of my community.”Becoming an Environmental LeaderIn 1996 Salvador Sánchez grew concerned about sea turtles. “I witnessed the poaching of turtle eggs. I couldn’t make sense of what was happening around me, because I didn’t have to take turtle eggs to survive,” Salvador explains. So he asked himself “why did anyone else?”That’s when Salvador began to investigate environmental law. Then, with the help of his brother, the deputy, he started his career as an elected official, running on an environmental platform, and working to protect sea turtles, eliminate trash, slow deforestation, and minimize beach pollution.

“I felt a need to work on these issues” Salvador says “and then a year ago I came across an NGO called Paso Pacífico, which helped me actualize some of these projects.”Capacity Building: Investing in Our FutureEager to become an effective leader, Salvador Sánchez enrolled courses on conflict resolution and watershed management. This dedication to learning earned him the respect of the community.
“For me, training is very important because it allows me to know and understand many issues better than I did before. I now see and appreciate much more that we Nicaraguans have,” Salvador explains.He talked about his recent participation in a seminar on the Effective Management of Protected Areas. He and his colleagues hosted a group of rangers from all over Nicaragua and Costa Rica and shared their experiences on the subject.

“The project was funded by Paso Pacífico Este thanks to support from foreign agencies, like USAID. In turn, we’ve opened doors to young entrepreneurs in Ostional, because we can further transmit the knowledge and information.”

Currently, Salvador Sánchez directs Paso Pacífico’s team of rangers in the Ostional area. Together, they are charged with a reforestation program, and preserving the natural resources of Nicaragua’s Pacific Coast.“The functions of my role include managing the ranger program, the incentive payments for conservation, environmental education, and reforestation.”Sánchez saids that education is the best way to raise awareness in children and young people. “It’s hard to change attitudes among the old, but for young people it’s not too late.”Tourism EntrepreneurIn parallel to his position as a professional conservationist, Salvador and his wife Carolina along with their son Diego, run a small bed and breakfast for tourists visiting Ostional.“Before taking the job with Paso Pacífico, I built two small cabins near the sea, where we offer food and lodging, and area tours. We offer dive tours, kayaking, and birdwatching expeditions.”
Salvador has managed to demonstrate that the right approach to sustainable natural resource management is profitable.“We still have much to learn. Sustainable tourism is a reality thanks to Paso Pacífico, and I am proud to be a part of this organization and help change attitudes, because I can be an example for others.”Fotos: Salvador Sánchez, líder comunitario de Ostional y GuardaRecursos de Paso Pacífico/foto: Adelayde Rivas Sotelo

This site uses Akismet to reduce spam. Learn how your comment data is processed.